Makamae was excited when she found out about Ke Kula Mele. "I always liked the sound and was pleased when I found a place to learn," says Makamae.

Learning the Hawaiian steel guitar has its challenges. A modest investment in equipment is necessary before one can even begin. A steel guitar, an amplifier, picks, and bars, are necessities that students require. New students who can afford the investment choose either a new beginner's setup or used equipment that can be found at music stores or online.

Makamae chose the new equipment route, selecting a Rogue steel guitar. This setup is imported from China, requires a minimal investment of about $100, and comes with a short scale 6-string steel guitar, a gig bag, and a set of legs that can be used to adapt the lap steel guitar to use it as a floor console.

While beginning instruments provide a means of familiarizing a new student with the instrument, serious students eventually develop a desire to advance their learning and skills by upgrading their equipment to instruments that have better sound, improved playing characteristics, more strings, and/or multiple necks.

Recently, Makamae was added to the roster of NextGen steel guitarists—musicians who are selected for their musical proficiency, confidence in performing, and willingness to engage an audience and share their musical story. Such an honor might be a reason to upgrade to a more advanced instrument. 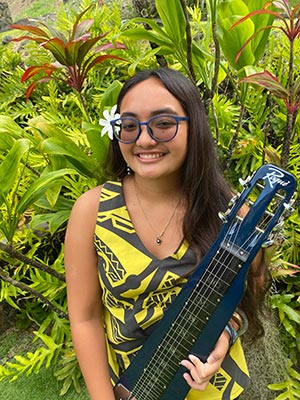 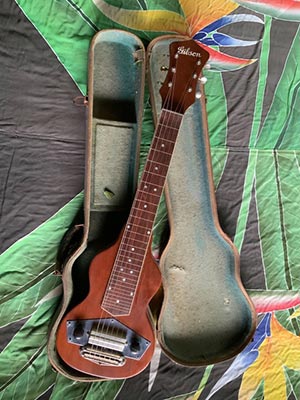 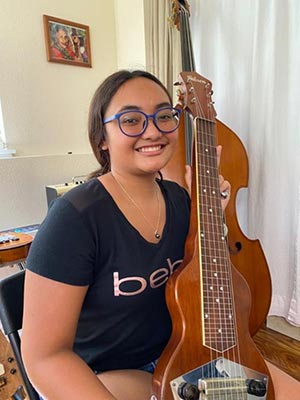 While the desire to upgrade may be there, the cost may be financially out of reach for many young players. Professional-quality instruments can cost upwards of several thousand dollars. Even vintage equipment no longer manufactured or offered in new condition can cost even more than brand new instruments. For example, a vintage Rickenbacher "fry pan" steel guitar, considered to be one of the first steel guitars manufactured and one of the most desirable among steel guitar enthusiasts, might sell for as much as $10,000 if available.

Many steel guitarists collect steel guitars as a hobby. One steel guitarist even called it the "Steel Guitar Player's Disease." Some musicians may select a variety of steel guitars (lap, console, acoustic, 6-string, 8-string, short neck, long neck, etc.) to support their particular playing requirements. Others might purchase guitars in a quest to find a guitar with that "perfect sound."

Luthier Chuck Moore is one such enthusiast. Known for his ""Moore Bettah Ukuleles" Chuck is also a seasoned steel guitarist and in fact has also built a few steel guitars himself.

"Being new to the lap steel guitar I had acquired quite a few of them trying to find 'that sound.' After I built a couple I started looking at vintage lap steels," says Chuck.

In his quest to find the perfect-sounding guitar, Chuck came across and acquired a vintage Gibson steel guitar.

Chuck recalls, "This Gibson was part of a large collection that was handed down to the owner's son after the owner passed away. Apparently the guitar spent most of its life in Waikīkī where the dad had lived for most of his life. He was a big fan of Hawaiian steel guitar but never was accomplished enough to become a performer. That didn't stop him from collecting them though."

Chuck researched Gibsons in an attempt to identify the specific Gibson model.

"The model seems to be an EH-125 from the 40s. I say 'seems' because it doesn't quite match up with anything Gibson put out at the time. Most of the EH-125s had binding; this one doesn't."

Chuck continues, "It also closely resembles the Kalamazoo brand. It might be a war time model since many instrument manufacturers during WWII were forced to cobble together anything they could using odd assortments of parts."

Chuck later determined that the instrument was likely a Gibson "oddball" EH-125 since it had most of the EH-125's characteristics except for a wooden fretboard more commonly seen on the EH-100. However, he mentions that none of the accoutrements are similar to any production model. Was this another "Frankensteel?"

Chuck says he'd rather be a player than a collector and that he's happiest doing with less rather than more. He knew about Ke Kula Mele Hawai‘i School of Hawaiian Music and that the school's director Alan Akaka appreciates instrument donations and "finds students that are needing or deserving of a better guitar to help them along their musical path." Chuck contacted Alan.

"I have a lovely 1941 Gibson EH-100 that is in very good condition and sounds wonderful but it's just been sitting in my closet unplayed for almost 4 years. (The original Lifton 'racing stripe' case is functional but in poor condition.) It was the first steel guitar I bought but I've already got plenty and I feel guilty when I think about it. I'd like to gift it to HIMELE if you can think of anyone who could use it."

After consideration, Alan decided that Chuck's guitar should be given to Ke Kula Mele steel guitar student Makamae Lyu-Napoleon.

"I rewarded Makamae since she was progressing well in her lessons," says Alan. He further explains that even in their new role as NextGen steel guitarists, Makamae and Isabella Bertelmann, another recent addition to the NextGen ranks, were reluctant to perform solos in front of the public.

Alan proposed that they play as a duet and they agreed to perform together. Their debut was at the Hawaiian Steel Guitar Festival at Windward Mall in June. At the August Hawaiian Steel Guitar Festival Keiki Kine at Kahala Mall, Isabella performed a solo and the girls again performed a duet with Makamae using her new Gibson. According to Alan, Makamae is preparing a solo piece for a future festival. 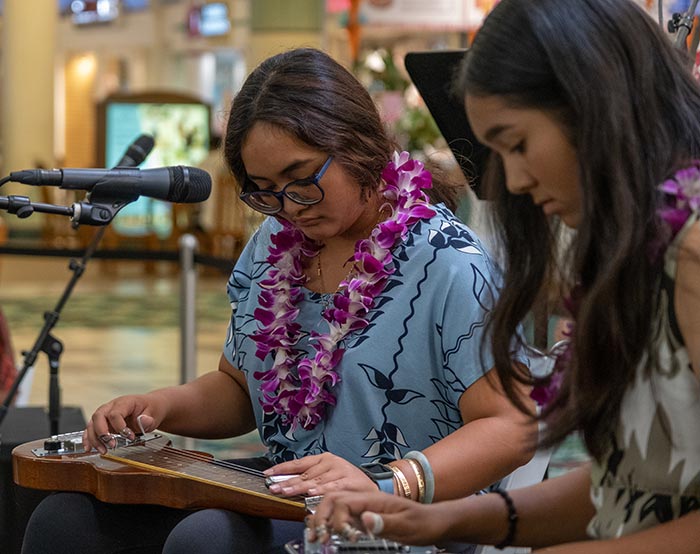 The importance of gifting steel guitars to up and coming youth steel guitarists is vital to the perpetuation of the Hawaiian steel guitar and cannot be understated. It reinforces their commitment to the instrument and the art, and rewards them with the opportunity to own a more advanced or complex instrument that they would otherwise not be able to either have access to or afford. 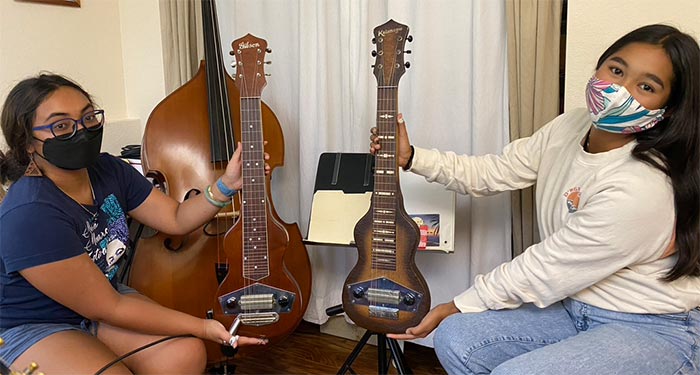 Makamae and Isabella showing their gifted steel guitars, a Gibson EH-125 and a Kalamazoo. pc-Alan Akaka

In summary Chuck says, "It's such a great way of encouraging young students while also making use of guitars that would otherwise sit in a closet unplayed."

Alan concludes, "There is a very supportive community of steel guitar players and fans who have not only donated money but also instruments and equipment to pass on to our next generation player."

Copyright ©2022 by Hawaii Institute for Music Enrichment and Learning Experiences, Inc., and Cyberventures Unlimited.Terms of Use