From Joymusic to Steel Guitar Music

Ed. Note: Kaua‘i Steel Guitar Festival guests may have noticed a different-looking acoustic steel guitar at the demonstration table. This same guitar was presented to the highest bidder with proceeds going to HIMELE, the event's producer. Here is the story behind that guitar.

Although I am in New Hampshire while I write this, my thoughts are on the beach of Waikīkī. As most of you know that have read my posts in the past, I spend most of my days when in Honolulu, from October till June, playing my Rogue steel with my Roland Cube on the beach entertaining, educating and planting seeds as Alan calls it, getting both tourists and locals to consider playing the steel. I get many favorable comments and donations that go to HIMELE.

On one of my visits to the Good Guys music store I noticed that they had a 1920 Wissenborn Steel Guitar for sale. I have wanted to add an acoustic steel guitar to my collection of Frypan and Rogue. I asked to try it and found it to be in immaculate condition; looked like it hadn't been played in 100 years. The strings were the original and it could not be tuned to C6 so they agreed to replace the strings for me to try. On my next trip there I was able to tune it, but with much difficulty as the tuners were very dry. It sounded great but for $4500 I could not justify the cost for what I wanted to do with it. It was worth the money if one was to put it in a museum where it could be at home. So I asked for the lowest cost acoustic guitar they had in stock to consider making my own steel out of it. The least expensive was $150, still a little more than I wanted to pay for what I wanted to do, playing on the beach or wherever.

I then looked on Amazon for the least expensive acoustic guitar they offered. I found one for $43, not sure what it would be like for that, but I ordered it along with a nut extension for $10. When I received it I was pleasantly pleased with the quality. The tuner it came with was not very good but when I changed the strings to C6 John Pierce strings with the nut extension it sounded great and held its tuning. I played it at one of my lessons with Alan and he was impressed as well and suggested I bring it to the upcoming Kauai Steel Guitar Festival. 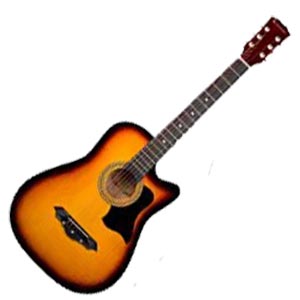 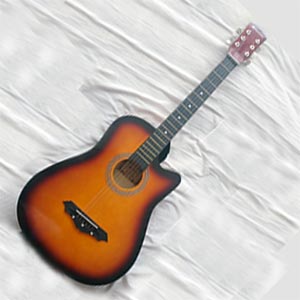 The Joymusic Steel Guitar after conversion

When I took it to the beach I would use it as part of my education and state that it was what Joseph Kekuku's guitar would have been like, great visual demonstration of the history. While at the festival I got an idea that I asked Alan to consider, about having all the great steel guitar players play and sign this guitar and then offer it for sale to the highest bidder for a donation to HIMELE. He agreed and all the players agreed and found the guitar a great instrument. We raised $325 from the sale and now I needed to order another Amazon guitar which I did and have since sold that one to someone who wanted to buy it at the beach and of course I ordered another as well as 2 more here in New Hampshire, one for me and one as a gift to my son who wants to learn to play steel.

The moral of this story, if there needs to be one, is that anyone can do this at very low cost and have a wonderful instrument. I challenge you all reading this to consider doing this and let me know your experience by contacting me at this address.

Dan reports that the pickguard shown on the Amazon picture, attached to the guitar with double-sided tape, was easily removed using care and patience.

Copyright ©2022 by Hawaii Institute for Music Enrichment and Learning Experiences, Inc., and Cyberventures Unlimited.Terms of Use