Ed. Note: The following article appeared in the March 14, 2019, edition of Lahaina News. The article is reprinted here with permission from Lahaina News. ©2019 Lahaina News and LahainaNews.com

LAHAINA - An exhibit of vintage steel guitars is on display at the Story of Hawaii Museum in the Outlets of Maui at 900 Front St. in Lahaina through April 15, 2019. The museum is open on Mondays, Tuesdays, Thursdays and Fridays from noon to 6 p.m. Admission is free.

Widely regarded as the only modern instrument indigenous to the islands, a Hawaiian named Joseph Kekuku is credited with originating the Hawaiian steel guitar in the late 1880s. Played acoustically, the instrument became popular across the country by the 1920s. Throughout the following decades, it was electrified and developed into other forms, such as the pedal steel guitar. Now the distinct sounds of the instrument can be heard in jazz, country, bluegrass, western, blues, folk, rock and many other music genres.

This exhibit, curated by master player Geri Valdriz and presented by the Story of Hawaii Museum, illustrates the history of the Hawaiian steel guitar and its importance in popular music. It features vintage acoustic Hawaiian lap steel guitars, including a Weissenborn-style hollow square-neck and a National Tricone Style 1 Resophonic. Manufactured in the 1920s and '30s, the hallmark of Weissenborn guitars was the hollow neck that created a louder guitar. For this reason, National developed its Tricone resonators in the late 1920s, and Rickenbacker designed electric lap steels. A 1955 Rickenbacker Model A-25, also known as the "Frying Pan" because of its circular-shaped body and long neck, is also on display. Manufactured by the Rickenbacker Electro Company from 1932 until the mid-1950s, it is the first electric guitar ever to be successfully marketed. 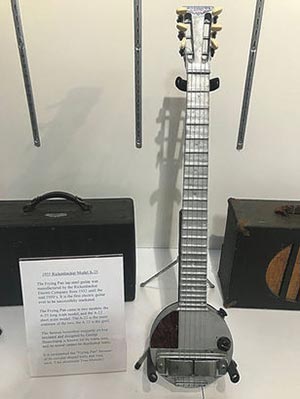 A 1955 Rickenbacker Model A-25, also known as the "Frying Pan" because of its circular-shaped body and long neck, is on display. 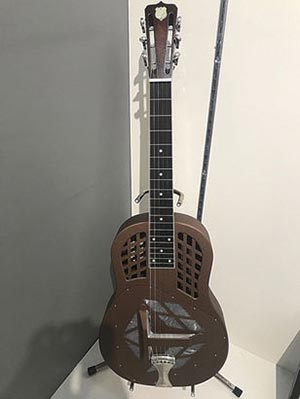 During the first decades of the 20th century, Hawaiian steel guitar players were in great demand. But, by the 1960s, the art and technique of playing it almost died out. Today, the beauty of Hawaii's original instrument is being perpetuated at the annual Maui Hawaiian Steel Guitar Festival being held April 12-14, 2019, at the Outlets of Maui.