I have a love affair with the Hawaiian Lap Steel Guitar.

I had an uncle that played steel guitar in a country western band when I was a child. He would play at family gatherings along with my father who played guitar and they would jam along with others that would sometimes be visiting. When I started coming to Hawaii 18 years ago, for the first 15 years I did not see a steel guitar being played. I would hear them on TV, radio and in lobbies of hotels we would stay at.

Two and a half years ago at the Lei Festival I saw a tent that had a banner that said, "Hawaiian Steel Guitar Association." In the tent were kids and older folks playing the steel guitar. I was amazed and went up to the person who seemed to be in charge and asked why I hadn't seen any steel guitars in all my time on the islands. He, Alan Akaka, told me that it was a problem he was trying to solve by teaching the next generation to play the steel. I told him I was interested in learning but would be leaving to go to the mainland in a few weeks but be back in the fall. He said, "See me when you get back if you are still interested."

I have been taking lessons from Alan for the past two years. 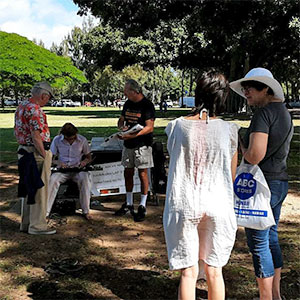 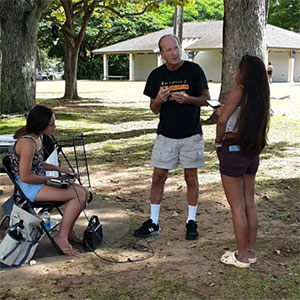 Daniel discussing the steel with guests

I found it challenging at 66 years old to start something as demanding as the steel, but I had a desire to be able to sound like others I heard playing. Last year when I returned to Oahu I wanted to share what I had learned from Alan. I found it very rewarding and intimidating to play in front of people but had very few opportunities so I decided to go to Waikiki Beach and just start playing. My limited experience was good enough such that people came up to me and said that they enjoyed what I was doing. After reading "Kika Kila" by John Troutman I had some knowledge that I knew I could share with those that asked me. When asked what instrument I was playing, I would explain about the origins of the steel guitar and its history. I would meet people from all over the world on the beach and on Kalakaua Avenue when I would play there at night.

I started to play where I could during the summer in New Hampshire, such as open mikes, out at the local lake, and for the neighbors, whenever I had an opportunity to spread Aloha. With some donations received from demonstration spectators, I created a banner that says, "Ask me about the Hawaiian Lap Steel guitar." Other donations I receive go to HIMELE to use for the advancement of the steel guitar.

I have had so many great experiences meeting people who say how much they enjoy hearing me play. They remark that their demonstration experience was what they expected to see and hear when they came to Hawaii. 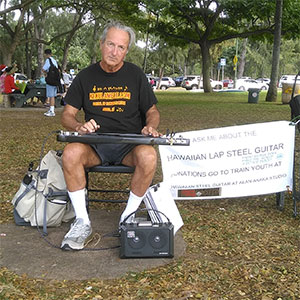 Daniel with his Rogue steel guitar 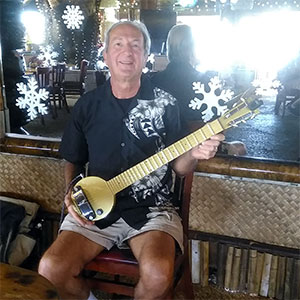 Daniel with his Rickenbacher Frypan

I could tell story after story of what I have gotten from these encounters, the joy I give and receive is beyond description. I have acquired a 1934 Rickenbacher "Frypan" steel guitar from someone I met on the beach and have made many friends. In discussions with Alan, I mentioned that I would like to expand my playing experience. I had noticed that at times the Royal Hawaiian Center Royal Grove stage was empty and wondered if I could just go there, set up, and start playing. He said that he would talk to the director to see if that was possible.

My intention in doing what I do is to expose as many as possible to the beauty of the guitar and Hawaiian music. After telling people about the history of the guitar, I ask them if they would like to try playing it. I get quite a few that take great joy in sitting and playing it. Of course I only bring my beginner "Rogue" guitar to the beach and let them play on it.

I have also been giving steel guitar demonstrations at various Steel Guitar Festivals statewide when I'm in Hawaii. I give them business cards for Alan and me and a HIMELE brochure so that they can consider lessons with Alan or at least join us at one of the Festivals.

To further planting seeds, as Alan calls it, I contacted the director of the Waikiki Community Center where ukulele lessons are given, inquired about giving steel guitar lessons and was told that they would consider it. After working out the details I can now confirm that I will be teaching a 6-week beginner steel guitar course starting February 15, from 11 A.M. till noon. I am looking forward to this challenge and appreciate the training material assistance Alan will be providing to me.