The Next Generation of Steel Guitarists and Musicians 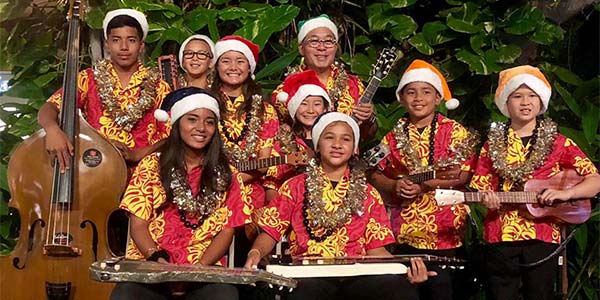 The NextGen concept was developed by Kumu Alan Akaka about eight years ago. The NextGen team comprises musicians who excel in their craft and are willing to share their talents publicly at music festivals and other Hawaiian music events. All NextGen musicians play multiple instruments, and some are vocalists as well. These students represent the Next Generation of Hawaiian music entertainment and are being trained in traditional Hawaiian music styles. A part of their instruction involves the history of the music they are playing; its composer, origin, and purpose.

A youth student of Ke Kula Mele becomes a member of the NextGen team by demonstrating his or her musical skill and performance readiness, no matter what age. A youth student will know they have reached NextGen status when they are called upon to participate in a public performance venue representing Ke Kula Mele. Upon graduation from high school, a NextGen musician becomes a NextGen alumnus.

NextGen musicians perform regularly at HIMELE-produced Hawaiian steel guitar festivals statewide, at Ke Kula Mele concerts, and at special events. All are skilled musicians who have developed stage and performance presence and are excited about sharing their talents with others. Each performance featuring the NextGen may feature a different group of NextGen musicians as determined by their availability, readiness, and performance requirements. But no matter who participates, audiences are sure to delight in the skill and persona of these Next Generation musicians.