A Visit With Patti Maxine

Joey: Who inspired you or were your music influences?

Patti: My first inspiration was my teacher because I went to take guitar lessons and he was a steel guitar player. His name was Elmer Ridenhour, and that was in Virginia when I was fourteen.

Joey: Do you play any other instruments or was the steel guitar your first instrument?

Patti: No, my first instrument was my voice, and then I took some piano lessons. And I took some, a little bit, of accordion and a little bit of dance. Did some dancing.

Joey: What are some of your feelings or experiences being one of the only female steel steel guitarists of your generation?

Patti: Well, when I first started taking I was fourteen, and I didn't, it didn't affect me at all. I thought, 'This is what I can do,' and I had a teacher who gave me the permission to do that. He was very encouraging and supportive, just like Kumu Alan (Akaka), and it made it easier for me. It was mostly when I went out into the music world to play was when I got stopped here and there. 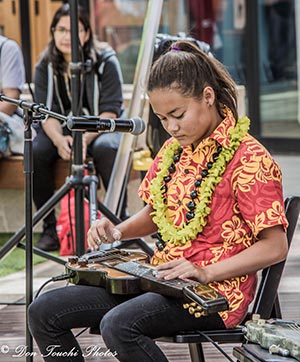 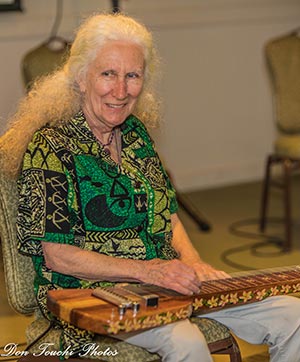 Joey: Which artists did you listen to growing up that have influenced your style of music?

Patti: Well, originally, I think probably Jerry Byrd, because my teacher knew him and, you know, played with him some. So that was probably my first steel guitar influence. Then I explored others, and then when I started playing Western swing music, some of the really early steel players on the mainland had adapted the steel to Western swing music, and it took the place of the horn section and stuff like that, so there were those parts. My teacher, actually, wrote out, not charts, but tablature, like where the numbers where the strings are, yes, positions, and he wrote out a full arrangement of "In the Mood," which was like a big band kind of song, and the steel had these solo parts, he wrote those out for me. So yes, all that kind of stuff, all kinds of stuff.

Joey: What kind of music do you enjoy the most and why?

Patti: I think probably Hawaiian music, because I'm learning more and more of the older, original (music), and that's what I really, really do like. And because where I live, in the Santa Cruz area, we have a pretty strong connection with Hawai'i musicians who come over there frequently, some of the older ones. I've played with Eddie Kamae and I've played with Led Ka'apana. I did different, you know, the older players, and they have that old style that I really started listening to. I've played with older country music players, too. They all had this different style of playing, all different kinds of music. I love people's original music. I play with a group right now called "Jazz the Dog," and we take songs and put them in different minor keys, or like major 7s, something very different, and I love that, because to me it creates a music palette. You get ideas of how to play melodies and things. So, that's the current band I'm in, and I really do like it, I really like it a lot.