If Malie Lyman were a "mystery guest" on the classic television game show "What's My Line?" she'd probably stump the panel.

At 13, she's the foremost female steel-guitar player in Hawaii.

Malie will be one of the young musicians playing with the some of the old pros at the free 2nd Annual Hawaiian Steel Guitar Festival at the Ka Makana Ali'i mall Saturday in Kapolei.

"I'm going to be doing 'Kipu Kai,' which I also sing, and 'Mapuana,' an instrumental that's a really beautiful song, and 'Hanalei Moon,' I'm going to be singing and playing it," she said during an interview last week in the Windward Oahu office of her teacher, master steel guitarist Alan Akaka. 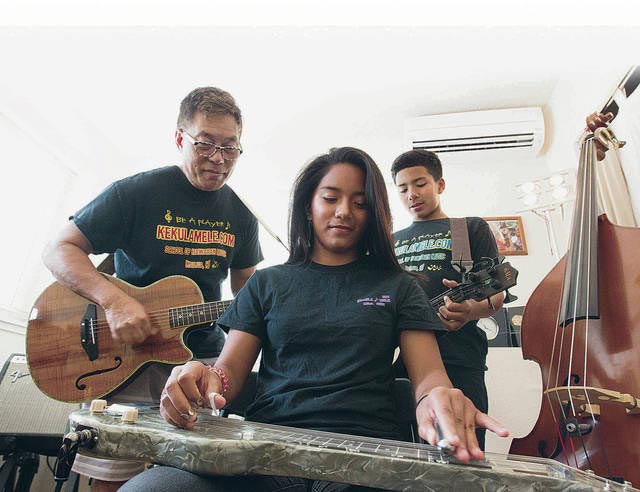 "Music helps me relax," said Malie, who speaks Hawaiian and is learning to play the saxophone in her Kamehameha Schools middle school band, which doesn't offer steel guitar. "When I'm doing homework and I'm stressing out about everything — I'm already stressing out about high school and I'm not even in high school yet — I lay on my bed and listen to music. Sometimes I'll hear a song and try to work out how to play it."

The 1940s-vintage Bickerson steel guitar she plays was given to Akaka by the president of the Hawaiian Steel Guitar Association with the request that it go to someone who deserved it. Malie was a natural choice.

Female steel guitarists have been almost unknown in the 13 decades since Joseph Kekuku began sliding a metal bar across the strings of a standard six-string acoustic guitar. In the years that followed his initial experiments, Kekuku was joined by other Hawaiian musicians — Frank Ferera, Ben Hokea, Pale K. Lua and Sol Hoopii v in taking the exciting new sound of the "Hawaiian guitar" across the mainland and Canada, and then to the far corners of the world.

The "Hawaiian guitar" was big in the early years of the 20th century. Steel-guitar players influenced the development of slide-guitar techniques by blues players, and the instrument was adopted and adapted so wholeheartedly by country musicians that many people think of it as a "country" instrument rather than a Hawaiian instrument.

The recordings made by the early Hawaiian steel guitarists inspired musicians around the world to take up the instrument and play Hawaiian and hapa haole melodies. 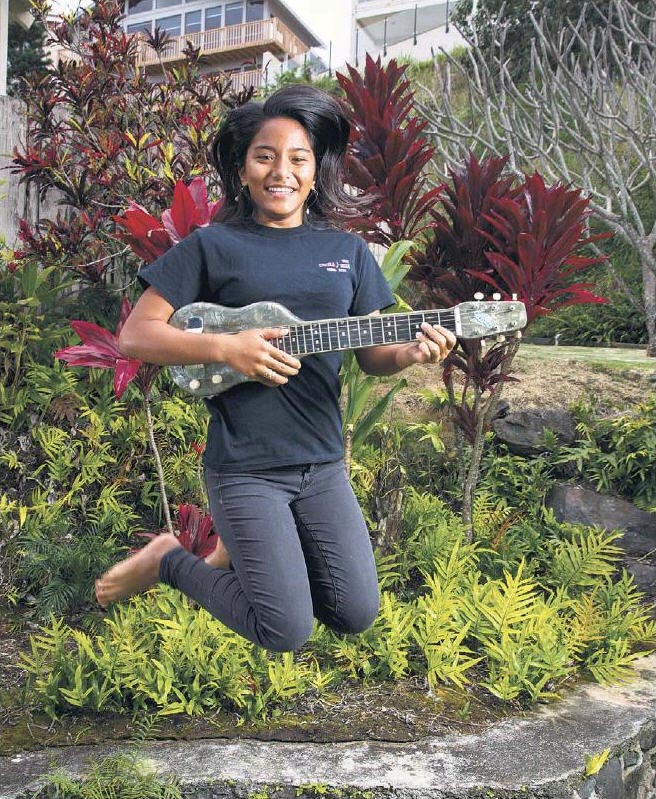 Musician Malie Lyman plays a 1940s-vintage Bickerson steel guitar given to her by Alan Akaka.

The steel guitar was strong in Hawaii too, at least into the 1950s. In the years that followed statehood in 1959, the regular six-string guitar and the ukulele became more hip, and the number of working steel guitarists started shrinking.

Today, Akaka, 62, is one of the few Hawaiian steel guitarists currently active in island music. Of the others, Greg Sardinha and Bobby Ingano are a year or two older, Casey Olsen, 50, is few years younger, and Jeff Au Hoy is a youthful 37. All but Olsen will be performing at the festival.

Famed steel guitarist Jerry Byrd, who came to Hawaii from Nashville in the 1970s, had one female student during his years teaching here: Owana Salazar, who is 64 and not currently on the scene as a working musician.

Malie has been studying with Akaka for almost four years. A month away from her 14th birthday, she is on track to become one of the great Hawaiian steel players of her generation.

It would be a natural progression. Her mother, Pomaika'i Keawe Lyman, plays ukulele and is one of Hawaii's foremost female Hawaiian falsetto singers; her grandfather, Eric Keawe, plays guitar; and her great-uncle, Gary Aiko, plays bass and is one of the great Hawaiian baritones of the second half of the 20th century and beyond.

Go back another generation and Malie is the great-granddaughter of the late Genoa Keawe, who was one of the greatest female Hawaiian falsetto singers of the 20th century. Pomaika'i Keawe Lyman is currently the custodian of Genoa's falsetto legacy, but since Malie also sings, that could eventually become her kuleana as well.

On her father's side, Malie is related to Hawaiian vibraphonist Arthur Lyman and Hawaiian falsetto vocalist Dennis Pavao, and through Pavao to slack-key master Ledward Kaapana and his twin brother Nedward. (Pavao and the Kaapanas performed as Hui 'Ohana.)

In the last years of the 20th century when some self-styled experts were saying there was no more Hawaiian music in Waikiki, Genoa Keawe and her musicians were playing poolside on Thursdays at the Waikiki Beach Marriott. The weekly shows were so popular with residents and akamai visitors that the Keawe family kept them going for a while after Genoa retired, with Pomaika'i singing in her grandmother's place.

Friends say that's where Malie got her first taste of Hawaiian music as public entertainment, even though she was too young to do more than watch her relatives play and sing.

Addison Ching, vice chairman of HIMELE and coordinator of the steel-guitar festivals, recalls Malie as a curious 6-year-old coming to the shows with her mother.

"She always seemed to be drawn to the instrument whenever opportunities presented themselves," he reminisced last weekend via email, adding it was "unusual for her to single out the steel guitar" since her mother and kupuna played other instruments.

Akaka had noticed Malie looking at his guitar and finally asked if she wanted to try playing it.

"My mom always said she wanted to start me with piano, but piano isn't the kind of instrument you can carry around to performances," Malie said. "My mom played with Uncle Alan at the Marriott, so we had a connection to someone who could teach me how to play it.

"I found it so fascinating."

The rest of the story is Hawaiian music history. Malie has played at steel-guitar festivals on the neighbor islands and in Waikiki. In between festivals she sometimes appears as a guest at her mother's shows.

When she finishes school, Malie plans to become a sound engineer. It's a career that will allow her to help other artists make recordings as well as record her own music. She got a taste of both sides of the business when she participated in the Mana Mele Project's second music video, "Island Style: 'Oiwi E."

Malie was seen in the video playing on the pier at Heeia Kea Harbor, but off-camera she also got a look at the program's solar-powered mobile recording studio.

Asked if she thinks of herself as a pioneer at a time when few women are known as steel-guitar players, Malie said softly that she "doesn't pay attention" to gender as a potential issue. For her it's about playing music.

Akaka describes her as "a role model for the younger players who are inspired to play like her."

Among those younger players Malie has inspired is 12-year-old Joey Misailidis. She'll be playing Saturday at the festival too.